▶️ I am a beacon of knowledge blazing out across a black sea of ignorance.
此頁面的（部分）內容需要被翻譯。
你可以幫助我們來翻譯此頁面 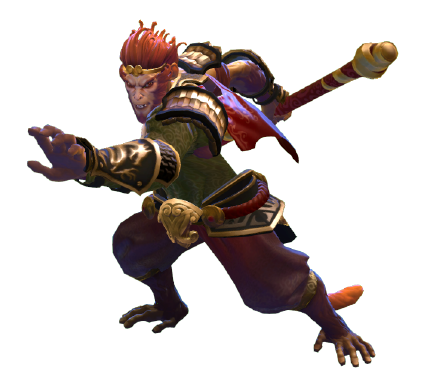 齊天大聖 ability to roam is top tier. His ability

叢林之舞 allows him to jump tree to tree, with low cooldown and no manacost. You can go from one lane to other in a few seconds without the enemies knowing, as they can't see you while you're in a tree. When you're ready to strike, an ally with stun will be of great help, as it can help you to fully channel

乾坤之躍. Commonly you're building a

淬毒之珠 to increase the success rate.

叢林之舞 also allows him to place wards without any effort, seeing that you can go to any place in the map in a few seconds, place the ward and enemies will rarely know which tree you are, and if they notice, you can simply jump to another tree, and the best part is that no Hero can keep up with your mobility. Once he gets level 2, you can use a skill point in

棒擊大地, empowering even more your ganking abilities by stunning dangerous or fleeing foes.